In this month of October  (when we're all a little superstitious) we asked our fellow state board members to provide a little bit of insight on common theatre superstitions. Prepare to be spooked. ​ 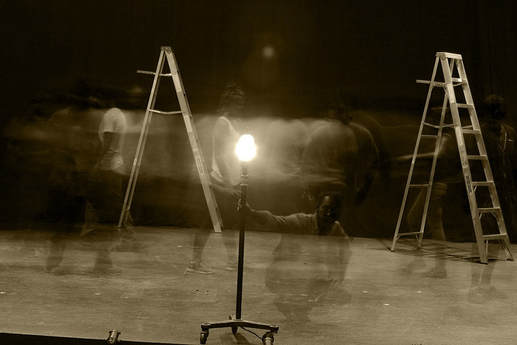 The Ghost Light is a theatre superstition that dates way back. Theaters from Broadway, Off-Broadway, Regional, Colleges, and even Schools leave the Ghost Light on at all times. In theory, the Ghost Light is a single bulb that is turned on when the theatre is dark. The light is said to keep the spirits that reside in the theater at peace. Others say is is to prevent the guys who locks up from falling off the stage! What do you think? While I was working as a Theater Techie in college, I had to replace the bulb of the Ghost Light. As I stood on the ladder, with sweat pouring from my forehead and reached to switch out the old bulb for the new one. Once the new bulb was screwed in, the doors to the theater all shut. From then on, I always made sure someone else was incharge of the Ghost Light!
-Mark Accardi (Individual Events Coordinator)​ 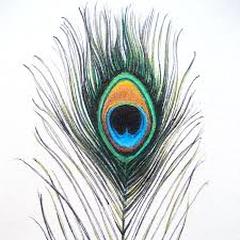 Did you know that you should NEVER bring a peacock feather on the stage? Not one of the more common theatrical superstitions, there are still many who believe that the pattern found on the peacock feather has ties to the Curse of the Evil Eye, or the belief that a malevolent glance can cause you injury or misfortune. Throughout history, this feather has been credited with many a disaster during production, including flubbed dialog, collapsed sets, and unexplained fires. A few years back I used peacock feathers in a choreographed dance number, unaware that there was such a superstition. I just thought the pattern was pretty! Lucky for us, nothing out of the ordinary happened that year, but next time I’ll think twice. Why risk a disaster?
-Lillianne P. Torrente (Sponsorship Coordinator) 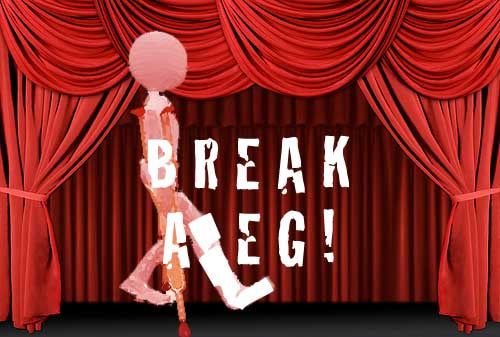 From what I was always taught, the term "break a leg" comes from vaudeville times. In a vaudeville house, it was never a guarantee that your act would actually make it to the stage, so to wish someone to "break a leg" meant that you hoped they will make it past the leg curtains and onto the stage- “breaking” through the backstage area and into the audience's sight line!
​-Joan Schubin (Workshop Advisor) 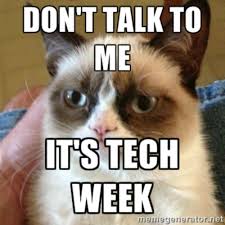 Dress Rehearsal Nightmares
✓Sky Masterson on crutches due to a soccer mishap.
✓Conrad Birdie ripping his gold pants during his “rehearsed to death” stage combat punch and fall.
✓Ensemble fidgeting during the wedding scene in Aladdin. And I am not just talking fidgeting, I mean full on nose picking, grabbing and itching unmentionable area’s.
✓Warbuck’s Grace not crossing her legs in her skirt, AGAIN!
​
We have all had our share of Bad Dress Rehearsals. After 14 years, I almost get nervous when we don’t have a bad dress rehearsal. Is it superstitious to believe a good dress means bad show? So this superstition is more of an old theatrical tradition. I think it is a way for us to ease our frazzled nerves at the zero hour. Think about it. You have been in technical rehearsals with anywhere from 20-120 students for at least two to three weeks, most likely after a long day of school and the challenges that arise typically. Now you are staying late, trying to get all the loose ends tied down and now it isn’t just you, it is a light tech, a sound tech, make up crew, costume crew, stage crew and really nervous and excited students. Odds are, you are tired, kids are tired, crew is tired….and what happens when we are tired - MISTAKES!!
I even read the mathematically/probability-wise if one is bad, then the other has no choice but to be good.
So take a deep breath and know that, students learn from their mistakes as do directors. No one is perfect and in live theatre….anything can, and will happen. -Caitlin Gioe (Social Media Coordinator)

GIVING FLOWERS AFTER A SHOW... NOT BEFORE... 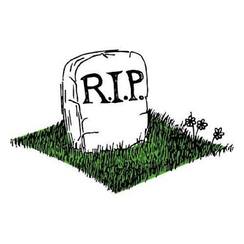 The idea of giving flowers to a performer at the end of a show has become quite the tradition. However, did you know why flowers are given after and not before? I always thought it was “a job well done”, but it turns out that show flowers have a little bit of an eerie history… Flowers were often picked from graveyards ( it was cheaper than buying), and it was thought that if flowers were given before, death was would be brought to the production. Flowers were given after to symbolize the “death of the show” on closing night. I have never really questioned the tradition, but come to think of it,  I have always been given flowers at a show. But always after… never before:)
-Veda Rouze (Junior Thespian Coordinator)
​
BACK TO BLOG